Like many Americans, I grew up learning about Dr. King and the Civil Rights Movement in school, but these lessons were often incomplete and even reductivist. Everyone knows that Dr. King “had a dream” that people would all be judged by the “content of their character” rather than the color of their skin. Fewer of us know that Dr. King also said that “[Many White Americans] believe that American society is essentially hospitable to fair play and to steady growth toward a middle-class Utopia embodying racial harmony. But unfortunately this is a fantasy of self-deception and comfortable vanity.”

As a philanthropy professional today, one of my criticisms of the lessons I received is that no one taught me that Dr. King was one of the most prolific fundraisers of the Civil Rights Movement. Few of us have been taught about the fundraising of Martin Luther King. As many have pointed out, he strongly criticized capitalism but he did say that philanthropy was “commendable” as long as it did “not cause the philanthropist to overlook the circumstances of economic injustice which make philanthropy necessary.”

It is true that there are philanthropists who prefer the tranquility of a “negative peace” to the radical work that must be done to make change. In King’s words, “The problems of racial injustice and economic injustice cannot be solved without a radical redistribution of political and economic power.” Philanthropy is an opportunity to see that kind of redistribution take place. Philanthropic capital can be freed from the capitalist economy to make change that would not otherwise be possible.

We should not overlook the fact that much of King’s work during the Civil Rights Movement was funded by foundations, local businesses, corporations, and other donors. According to the  National Philanthropic Trust’s History of Giving:

Philanthropy is a form of nonviolent action. It was and remains key to the strategy of the Civil Rights Movement. It was not just Foundations that funded King’s work, he also enjoyed support from individuals, including celebrities. In the past, on this national holiday, we have shared  fundraising letters written by Dr. King. Today, we are pleased to share this one written in 1967 on behalf of the SCLC: 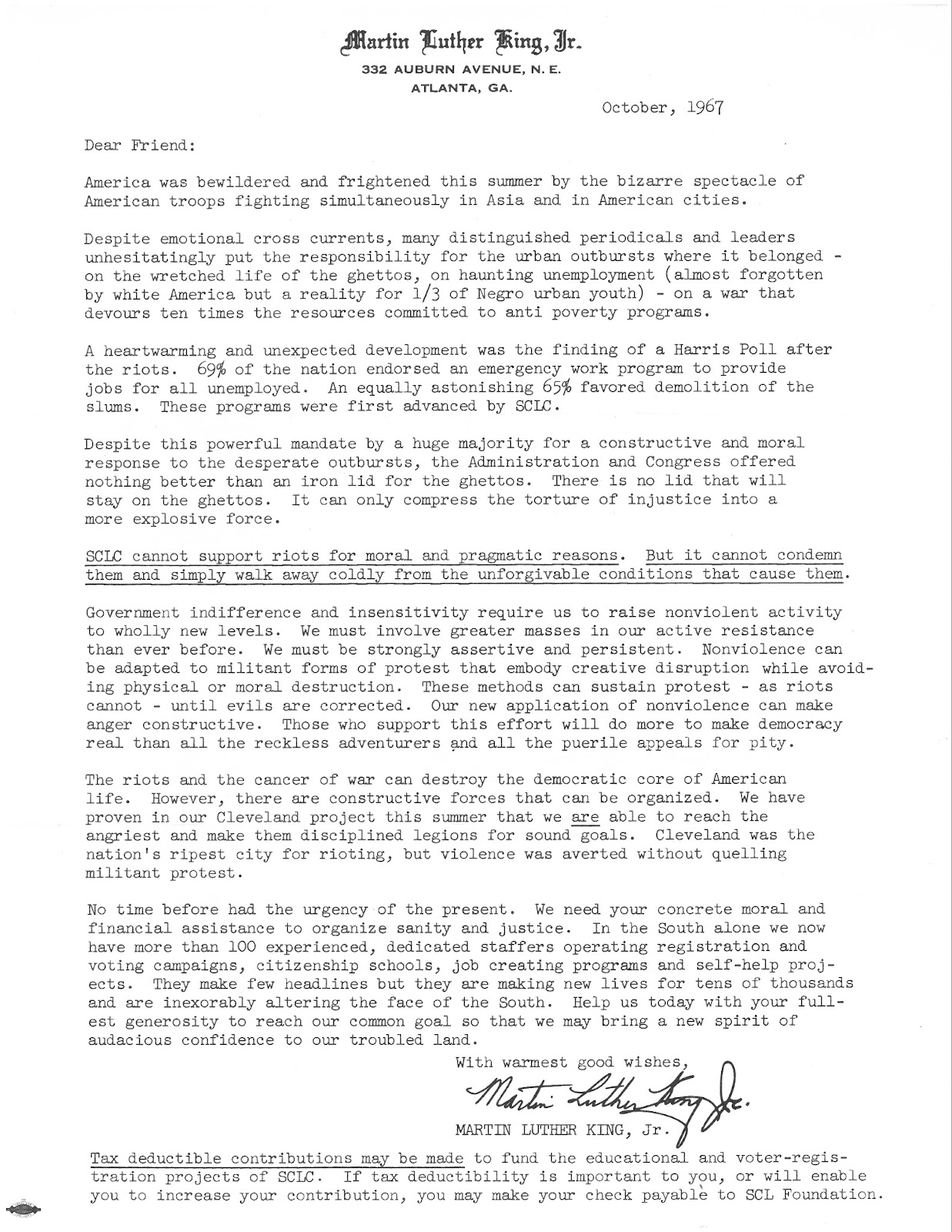 Like any good fundraiser, Dr. King knew that thank you letters were just as important as request letters.  Here is a thank you letter from Dr. King to the legendary entertainer Sammy Davis, Jr.:

Whether you are spending today in service or reflection, we hope you enjoy reading these historic fundraising materials.

We love reading fundraising materials here at Unfunded List and we regularly review proposals related to social and racial justice. If you are fundraising for any cause, please consider submitting a proposal this Spring.  And if you are looking for service opportunities you can help the next generation of changemakers by signing up to be an Unfunded List evaluator.

Philanthropy Consultants & Giving Advisors The administration of generosity is important work, and many philanthropists want to do it well. Recognizing their own limitations, they